wicd-curses is a console program that allows you to connect to wireless wifi networks. I found out about this after chatting on IRC with a few other users on freenode and mentioned I was having issues connecting to wifi from the command line.

This can be installed using apt install wicd-curses. A man page can be viewed with man wicd-curses. 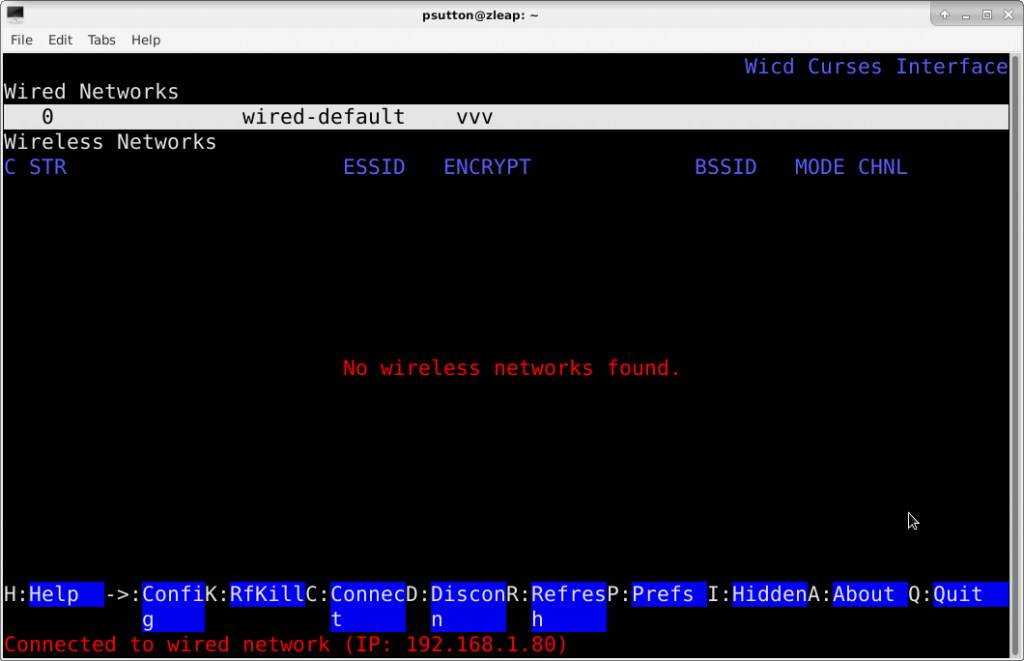 As I am using Debian then the package information can be found here.

The above screenshot is from my desktop which does not have or even need wifi connection. But on my netbook this should show available wifi networks, and allow the one you want to be selected. You will probably need your wifi credentials e.g password etc to connect further.

Another step to seeing if I can actually use a computer directly from the command line without the need for a gui. I need to try and configure alpine to now send e-mail and I may be nearly there. However this isn’t really essential to my needs anyway.

I joined Mastodon social network last year. I am now reposting this guide to signing up and getting started.

Firstly you need to go to join mastodon where you will be presented with the following:-

Clicking on Get Started actually takes further down the page to:-

Where you can select from one of the many instances available, your choice may be influenced by:-

Or some other reason.

I decided to go for quto.org as this is a STEM related instance. So clicking on the signup link.

Filled in the credentials. After which I am asked to confirm. You will be asked to agree to some terms and conditions too.

Once confirmed you are taken to a set of 3 intro pages:

Then you are presented with

Where you can now set up your profile etc.

Enter their fediverse id in to the search box.

Usually this takes the form of

You can follow me on the above qoto.org server by clicking this link.

In order for you to see items from my blog in your feed you need to take the following step in your profile settings.

Which is pretty easy to do, clearly this gives you a lot of control over what is then fed in to your feed.

Very easy sign up process, which is great, it looks like this instance also supports inline $\LaTeX$ which is cool too. I have now subscribed to this blog from mastodon.

Not quite ready to #deletetwitter yet, I have some contacts. Compared to the sign-up process on more old fashioned social media this is a breeze.

I have been working on some more projects around IRC chat bots. I decided to try and integrate a Magic 8 ball project so that an IRC bot would give a random response, chosen from a pre- defined set within the code (can be changed) when the bot is sent an instruction in my IRC channel.

This project builds on some of the code covered in my Minecraft Pi bot project. Mostly the base code from the Linux Voice article.

The code is currently being tested in ##zleap on Freenode.

At the moment magic8 can be sent the following commands:-

uname and uptime are Linux / Unix commands, it is therefore assumed you are running on a GNU / Linux system.

I have created a welcome message from the bot, so when it joins it says hello, also says goodbye if !botexit is sent.

Feel free to fork the project and make improvements and further customization. Perhaps discuss further on IRC or via social media e.g Mastodon.

A few years ago, Linux Voice published a really simple IRC bot project in the magazine. I took this and managed to get it to connect to a minecraft Pi game and I could use IRC to send instructions to the game.

In the screenshot below the bot has received an instruction to execute uname -a and the output is directed to the game screen.

To get all this to work you need:-

You also need to connect to either:-

note You need to ask if it is Ok to connect bots to IRC servers.

In my code it is connecting to a Raspberry Pi (original model) running an IRC server.

It does work, but there is probably potential here for expansion and improvement.

wicd-curses is a curses-based network controller that uses the Wired/Wireless Internet Connection Daemon (wicd) to control your network connections. It is suitable to run in terminal multiplexers like screen.

It is designed to imitate the GTK-based wicd-client(1) as much as possible, and uses the Urwid (http://excess.org/urwid) console widget library to vastly simplify development.

This man page only documents the current status of wicd-curses. This may/may not be the most up-to-date document.

Over the past few months, the social network Mastodon, has seen a big increase in the number of new users joining.

Mostly people from networks Twitter, unhappy, mostly with censorship. In late 2019 there was a big migration from users in India.

Unlike with current mainstream (or should we just say old fashioned) social media. Mastodon is decentralised, so what does this mean?

In essence, there is no central control, just a development model. Mastodon is a network made up on independently owned server instances. These can all communicate with each other, thanks to a protocol called Activity Pub.

With the Fediverse, privacy is important, you won't find:

During the UK general election campaign, the mainstream news media was taken over by election news. Social media played a big part in campaigning as politicians tried to convince the electorate they were the people to vote for.

Politics has not caught up yet. Not sure if that is a good or bad thing.

You can find topics of interest by searching for tags, which accompany posts.

If you think it is time to #DeleteFacebook or #DeleteTwitter then feel free to come over to a better way of doing things. There are alternatives to other services too, such as Google, Youtube, Instagram. All these alternatives federated so content can be shared on the Fediverse too.