This graphic was posted to Mastodon, I am sharing here as it demonstrates a really good point. 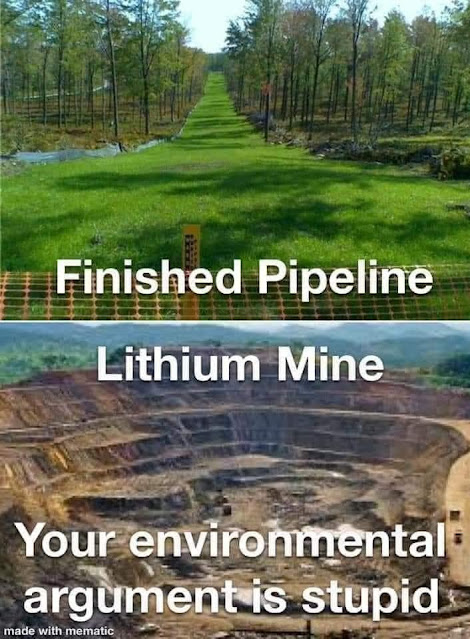 While the pipeline is probably going to be oil or gas, the so called green alternatives seems to have a huge environmental impact.

Before lockdown in 2020 I was planning a STEM activity around this topic, or more specifically the effect of Lithium mining on local groundwater, and how this takes groundwater away from farmers etc.

There is a video about the Extraction process on youtube.

So compared to Oil / Gas, using lithium to power cars does not release gasses such as $CO2$, $NO2$ and $CO$ so the batteries are cleaner, but are they cleaner if you look at the whole lifecycle of the battery from getting the raw materials ?

Interesting article from Channel News Asia (CNA) on sustainable food production. As climate change and disasters jeopardise food security, could the switch to alternative proteins be the solution to the region’s need for a sustainable food ecosystem? Money Mind reports.

Looks like some good innovation here. This was posted by GreenPeace [1] to Mastodon. The article [2] is worth reading so I am not going to try and paraphrase and sum up here as the message could end up getting lost that way. If you are not sure what Jackfruit are, I have also included a link to a BBC Food page on this [3].

I wasn't however aware that rice production was being affected by climate change. This really isn't good given how widespread rice is, for so many in Asia.

Another post on Mastodon this one posted by SilverSpookGames. Sharing here as I doubt that the BBC et al will bother even giving this a mention.

Looks like a really good project, shows what CAN be achieved too.

Back in October, there was a Major oil spill in Mauritius. Thanks to other news, this has largely been forgotton about.

A reminder that this happened, an article from, back in October, by Ecowatch is here

Really good article, if there is a follow up to show what the long term consequences of this were I will post it.

For anyone unsure of where Mauritius is, there is a map below from Open Street Map.

Another interesting climate group on the Fediverse.

The guardian newspaper had an article on this. This could make another STEM topic discussion point. Protecting the environment is important and we can't neglect issues such as this by concentrating on our carbon footprint.

If we drive a car, we can work out the Carbon footprint from how much fuel we burn, but does this calculation include how much Carbon is released if it is released during the extraction process, such as what is mentioned in the article.

With all the talk on Carbon footprints, why don't we also focus on how much Nitrogen Oxides and other particulates. are released by cars?