How to debunk a conspiracy theory in just a few minutes

There are more than a few conspiracy theories surrounding the origins of COVID-19. This is understandable. People have this innate (albeit irrational) desire to blame someone when something goes wrong. The notion that “shit happens” is not a popular one because it leaves people feeling like they're not in control.

Of course they're not, which makes it even worse.

Still, while most conspiracy theories are harmless, some are very harmful and the COVID-19 origin stories are some of the deadliest of the lot. For purposes of instruction, I'm going to pick two of the largest: one from right wing lunatics, and the other from left wing nuts. These are:

The narrative of this story is that the virus leaked, somehow, through improper handling (or even malice, in extreme variants) from the Wuhan Institute of Virology to the nearby Huanan Seafood Fishery Wholesale Market. In this story some virus samples obtained from bats somehow leaked through irresponsibility and some poor saps in Huanan Market caught the disease and the rest is history.

Let's take a closer look at this – let's be generous and call it a “hypothesis”, shall we? It has a singular flaw: it's a load of fetid dingo's kidneys. Let's take a look at a map: 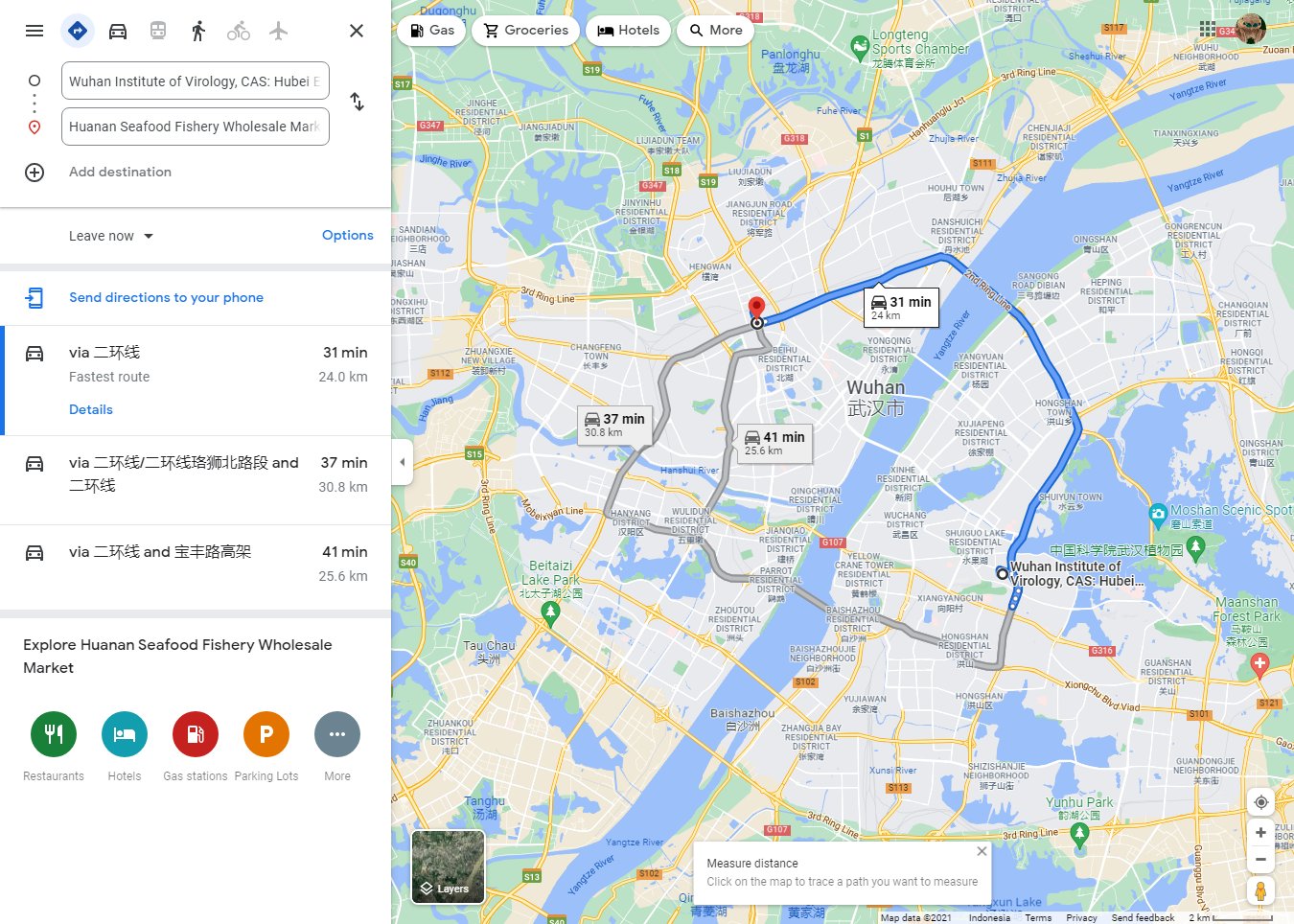 The Wuhan Institute of Virology is in Wuchang (and a medium stroll away from my home), one of the three cities that were merged to form Wuhan. (The other two are Hankou and Hanyang.) The Huanan Seafood Fishery Wholesale Market is across the Yangtze river in Hankou. It's almost 12km away as the crow flies, and it's a 24km drive through some of the densest traffic of Wuhan. This is not “nearby” by any meaningful sense. These two are separated about as far as are central Harlem and central Queens in New York City, with more natural barriers and fewer roads available between them.

But do you know what is nearby? Here's another map: 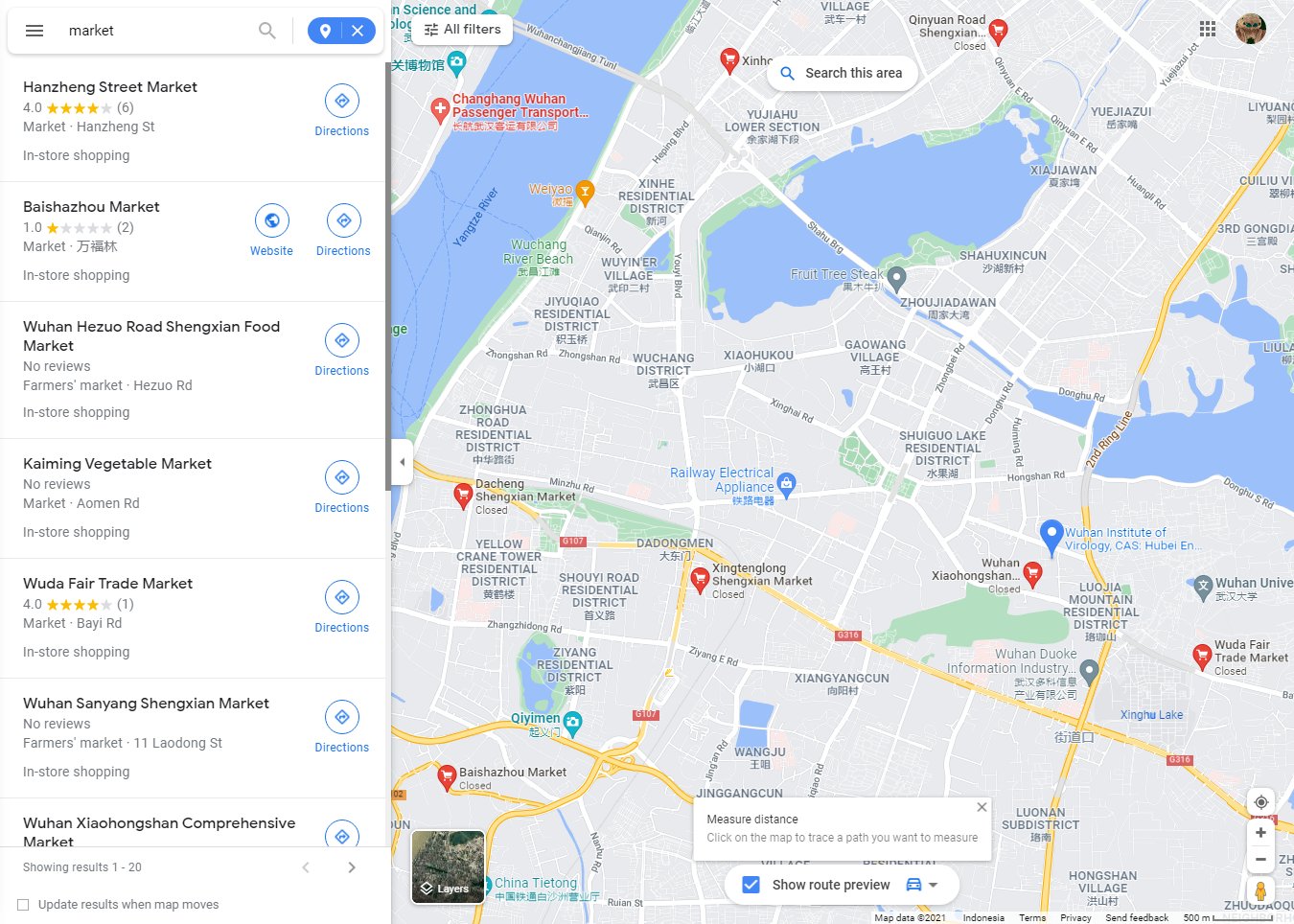 Google Maps has a paucity of information about Chinese cities (for obvious reasons), so only the largest and/or most interesting markets are marked. They're out of date, with so many being flagged as closed, but all of those flagged markets—far closer than Huanan by far!—were open and bustling in December of 2019. So how, precisely, do you think that a disease spread from the Institute to Huanan without popping up in the literally dozens of markets, malls, shopping streets, bars, restaurants, and other such entities that service Wuhan University?

Oh, did I fail to mention that? The Wuhan Institute of Virology is in the middle of the single largest, most important university in Wuhan. Wuhan University is a powerful economic force and is ringed by markets, shops, restaurants, bars, and a whole host of other venues that are ripe for viral transmission.

Yet it supposedly popped up in practically another city. Hmmmm…

Let's just stop embarrassing the right wing lunatics with facts, shall we?

This one is even easier to debunk. Here's another map: 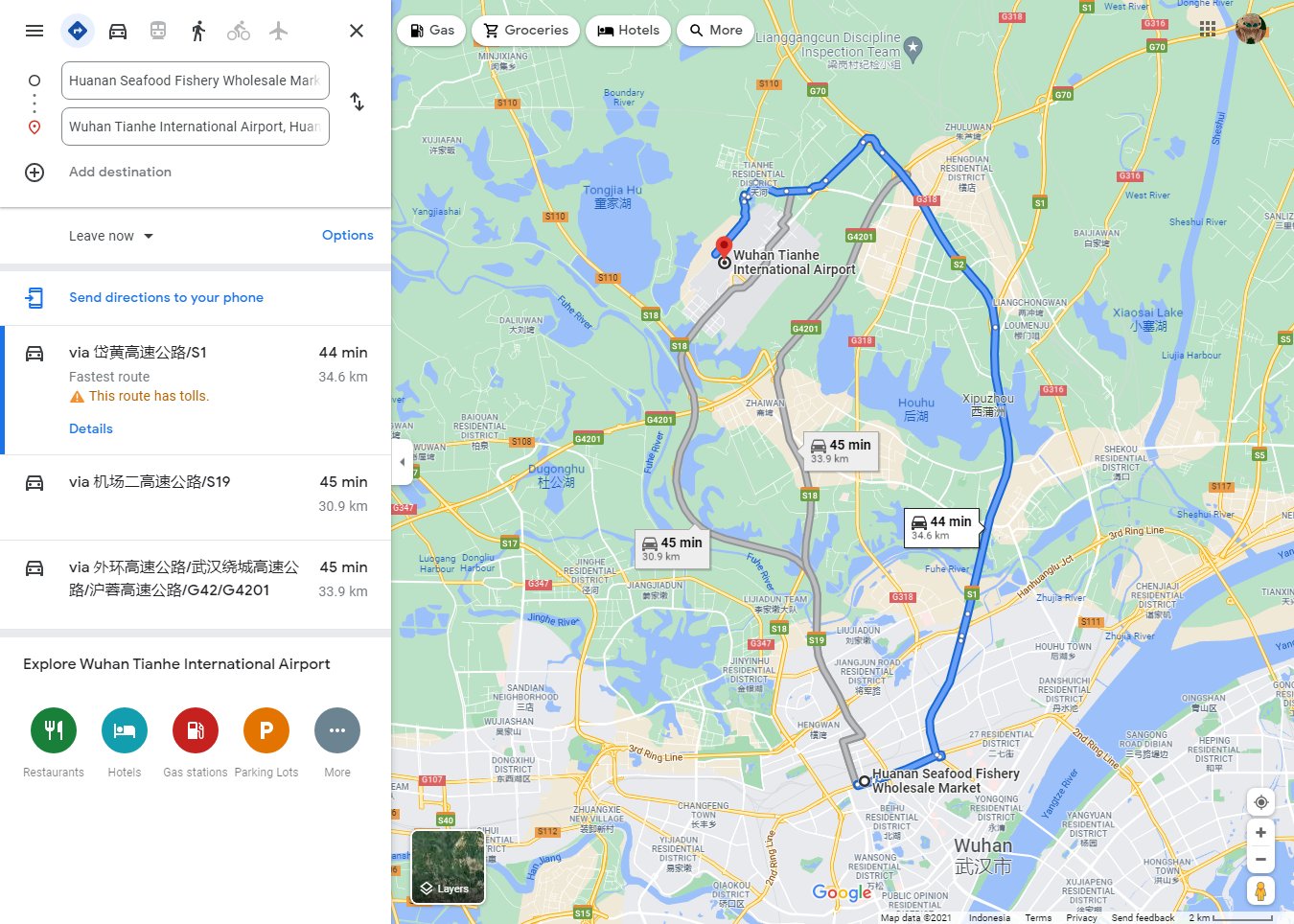 Picture the narrative involved. In the absolute least unlikely scenario, someone with COVID-19 had to fly in to Tienhe (somehow not infecting the hundreds of people also in the plane) and then make a beeline for Huanan in some form of conveyance that wasn't near anybody else. Then they walked into the market, coughed, and unleashed the viral bomb that subsequently ravaged the world.

Does this strike anybody with a brain cell as being even remotely plausible? Really? How would you fly for hours in a tin can with recycled and then-largely-unfiltered air without infecting people in it first? Why would someone go straight from the airport to the market? Would they not go home first, or to a hotel? Maybe get dinner? There's literally dozens of trivial holes to poke in this theory even if you don't have the map above. With the map above it's laughable.

No, the left wing nuts need their safe space from the mocking laughter that they so richly deserve for foisting this on the public.

So where did it come from?

Because this is so badly politicised now, there's literally never going to be a full story known. What is known, however, is that in November there was a string of odd fevers leading to death in a straight line leading from Chongqing and environs to Wuhan in the month of November. Poor medical attention in rural China combined with unwieldy bureaucracy in the Chinese CDC led to the importance of this being missed. Quick cremation also led to lost tissue samples and subsequent opportunities.

The prevailing narrative that this provides is that hunters in Sichuan who hunted or trapped wild animals were directly or indirectly infected by the bats mentioned in the first conspiracy theory. They then carried this to Wuhan and its lucrative wild game market: the infamous “wet market” (termed “farmer's market” by non-racists) where the viral bomb blew up.

The rest is current events.

My narrative is still speculation. It's just speculation that doesn't directly contradict trivially verifiable facts. As more facts come to light, if they ever do, the narrative will of necessity shift. That's the strength of not being a conspiracy theorist, though. I'm not invested in my story. I don't mind changing it in the face of fact.